Coloring pages with athletes contain huge amounts of energy, strength and faith in success. But it could not be different when you find top football players like Cristiano Ronaldo, Messi, Neymar, Dybal, Pogba, Mbape, Pele and Maradona in one place. There are also NBA basketball players Michael Jordan, LeBron James, Kevin Durant. And even top tennis players Rafael Nadal, Nowak Djokovic and Roger Federer. Check athletes coloring pages for free! 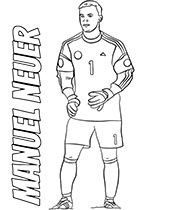 1. Real and Atletico are notable football/soccer teams from which city?

Real and Atletico are from Madrid (Spain).

2. What country is Cristiano Ronaldo from?

Cristiano Ronaldo is from Portugal.

4. Is the NBA a league of hockey or basketball?

The NBA is a basketball league.

6. Rafael Nadal and Novak Djokovic are famous representatives of what sport?

They are famous tennis players.

9. Were Michael Jordan and Scottie Pippen playing for the same team?

Pictures for all fans of the sport