Birds are angry again! So choose your favorite Angry Birds coloring pages, print and color them in vivid colors. Top Angry Birds series like Rio, Space and Star Wars are included. And as a bonus coloring page with “angry style” Santa Claus. Angry Birds do not rest and fight the constant battles against pigs. Would you like to join them? Which side will you choose in this endless war? 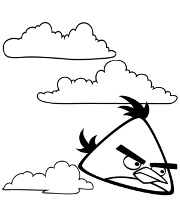 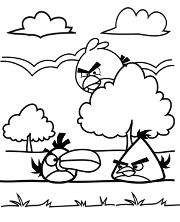 1. Which bird can destroy a rock by one strike?

The Black Bird can do that.

3. Into how many smaller birds the Blue Bird can split?

The Blue Bird can split into 3 smaller birds.

4. Rovio is a company founded in Germany or Finland?

Rovio is a company founded in Finland.

5. What weapon is used to shoot birds in the Angry Birds game?

6. Can Angry Birds be played on smartphones?

Yes, this game was originally developed for smartphones.

7. Are pigs allies or opponents of birds in the game?

The first Angry Birds game was released in 2009.

A great selection of pictures for gaming fans

This is probably the best set of free printable Angry Birds coloring pages with all Angry Birds and Pigs in a whole universe. Are you ready for a battle? There is a lot of pigs to be destroyed: King Pig. Minion Pigs. Gale. Leonard. Corporal Pig. Foreman Pig. Chef Pig. Fat Pig. Zombie Pig … Those coloring sheets are proper for smaller and bigger children. As a matter of fact, there is no age restriction in this category. But all pictures with the craziest birds in the computer world are waiting for you to give them some war colors. Are you ready for Rumble? Pick your favorite coloring page and have fun. Topcoloringpages.net – your ultimate selection of coloring books on the whole internet.