Star Wars coloring pages are 40 free pictures showing epic George Lucas’ space opera. They contain the most notable protagonists from all parts of the story: Darth Vader, Yoda, Princess Leia, Luke Skywalker, Obi-Wan Kenobi, Chewbacca, Rey, Finn, BB8, X-Wing pilots, and many others. Printable Star Wars coloring sheets are designed to fit the needs of both – children and adults. Let the force and crayons be with you! 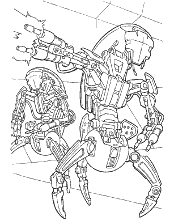 To see the correct answer, just hover your mouse cursor over a question

2. Which Star Wars protagonist has green skin and talks in a very peculiar way?

4. Finish the missing words 'A long time ago in a galaxy...

6. What weapons do Jedi Knights usually use?

7. Is Darth Vader a villain?

8. Is Chewbacca's nickname Chappi or Chewie?

A long time ago in a galaxy far, far away … was created the coolest collection of Star Wars coloring sheets in the whole universe! The purpose was to deliver tons of fun to people all around the world. And after months of waiting, finally, the most notable cosmic saga made its debut on Topcoloringpages.net!

You’ll find here almost all characters of the series e.g. Anakin Skywalker, Luke Skywalker, Obi-Wan Kenobi, Palpatine (Darth Sidious), Han Solo, Princess Leia Organa, C-3PO, Rey, Finn, Chewbacca, Queen Padmé Amidala, R2-D2, Yoda, BB-8 and many more… The scenes from both the early and the newest parts. Printable star Wars coloring pages are packed with action and cosmic adventures. If you’re a fan of the Star Wars series, then it’s the right place for you to stay for longer.

Filled with cosmic creatures, spaceships, lightsaber clashes, supernatural forces, and positive energy. Free Star Wars coloring pages are here for all true science-fiction fans – both children and adults. Star Wars pictures are best for older kids. It’s something you just can’t miss! May the force be with you!