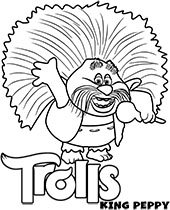 What did Branch save Poppy from?

What is the title of the song that trolls sing to make the Bergens happy?

This song is “Can’t Stop The Feeling”.

Bergens are rather good or bad guys?

Is Branch usually happy or grumpy?

He usually is rather grumpy.

What are the names of the troll twins?

They are Satin and Chenille.

DreamWorks Animation did it again! They created the most compelling animated feature film and characters who instantly became the new icons for kids all around the world. So check the coolest set of printable Trolls coloring pages now and dive into the world full of colors, dance and happiness. You’ll find here a number of Poppy’s closest friends known from TV series like Biggie, Chef, DJ Suki,  King Peppy, Cooper, Satin and Chenille and many more, including the most notable Bergens. Free Trolls coloring pages are suitable for both – boys and girls, so print your favorite pictures now. Invite the whole family to join you because coloring together is even more entertaining!