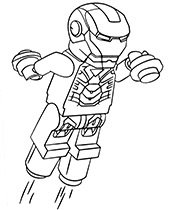 2. Who is not a member of Avengers: Thor, Iron Man or Batman?

Batman is not a member of the Avengers team.

3. What is a superhero nickname of Anthony Edward 'Tony' Stark?

6. What is Thor's main weapon?

It is a hammer (Mjolnir).

7. Which superhero has an outfit that resembles the American flag?

8. Is Black Widow female or male?

Black Widow is a woman.

40 top Avengers coloring pages for children 🦹‍♀ This cool coloring sheets category is so packed with action, strength and superhuman abilities like no other! No wonder, since we’ve gathered for you here the most powerful superheroes known from comic book cards, action games and movies. Printable Avengers coloring pages are a real treat for all fans of stories written by Marvel. You’ll find all the top superheroes assembled by S.H.I.E.L.D., including:

You can print all free Avengers coloring sheets now or download in PDF format, and then color the way you like. Use your imagination and create real Marvel superhero masterpieces! High quality is always guaranteed on Topcoloringpages.net. The Avengers coloring pages are 40 unique and super cool pictures to print. They are intended mainly for children, but there’s nothing to prevent parents from also coloring them. Coloring together is great entertainment. So choose your favorite printable Avengers coloring sheets and then give them some color. Who is your favorite Avengers: Captain America, Hulk, Black Widow, Iron Man, or maybe Captain Marvel? No matter who you like the most you’ll find all of them in the coloring pages above. Have a nice coloring!