Look at Topcoloringpages.net! It’s a bird, it’s a plane… no, it’s Superman! The first real superhero and a true Marvel legend, known from the classic comic series. The one and only, the invincible man of steel on a unique selection of great, action-filled Superman coloring pages for younger and older kids. He is always ready to spread justice and help those who need him. So are you ready to help him and color his amazing adventures? 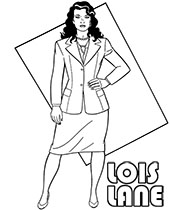 His true name is Clark Kent.

3. What planet does he come from?

He was born on Krypton.

4. What city does Superman live in?

He lives in Metropolis.

5. What letter is inside the Superman logo?

8. What newspaper does Clark Kent work for?

9. Is Lex Luthor a positive character or a villain?

Lex Luthor is a villain.

A great savior of Metropolis, an invincible Man of Steel is back to action in a category of printable Superman coloring sheets. The inconspicuous journalist of the local newspaper has several superpowers that no one knows about. And he uses them in disguise and only for good purposes. Who didn’t want to be like him as a child?

To be super handsome, super strong, and possessing superpowers is a big dream of most children (or at least boys:). Unfortunately, he can be only one. But you can print and color his various, incredible adventures on Topcoloringpages.net’s Superman coloring pages absolutely for free. Check all the pictures. Many of them are very similar to a comic book. They’re filled with impetuous action. Luckily good always prevails over evil. And in the end, be sure to check quite unexpected facts about Metropolis’ life.