Minecraft coloring pages are pictures showing the most popular 3D sandbox video game ever. It’s a true social media phenomenon in a series of amazing pictures for coloring. Find all top characters (including Steve and Alex), animals, zombies, villagers, tools, logos and even Ender Dragon and Enderman. All printable Minecraft coloring pages are blocky and pixelated, the same as the whole Minecraft world. 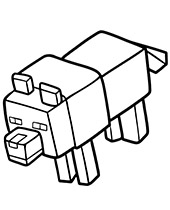 2. What are all Creepers afraid of?

3. What's needed to use to tame a parrot in Minecraft?

4. How can you craft obsidian?

By mixing water with lava.

5. Can you play Minecraft on Xbox consoles?

Minecraft pictures for all fans

This collection of 40 free Minecraft coloring pages is a real treat for all fans of that epic game. You will find here the best of everything: favorite characters, of course including Steve and Alex, various animals, tools and weapons, villagers, zombies, Ender Dragon and even the original logo. Isn’t that cool? What is more, it’s all completely free and ready for immediate printing. Minecraft coloring pages are a source of great fun in 3D style. Without limits and logging requirement. So print and use all 40 Minecraft pictures as often as you like and wherever you are. Printable Minecraft coloring sheets can be great fun for the whole family. Blocky, pixelated, raw – exactly like the whole universe of that absolutely unique game. Enjoy!