This is probably the coolest set of coloring pages for children worshiping cars. You’ll find here many different models and types of motorcars. Completely new and shiny racing cars and right next to them, the classic oldtimers. We even have a concrete mixer, firetruck and an ambulance. Print coloring page with your favorite vehicle and try to color it in several ways. Then you can decide which color fits the best. Is it red like classic Ferrari or rather yellow like Lamborghini? You decide! 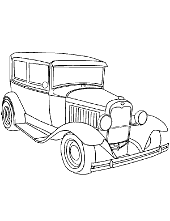 To check a correct answer just place your mouse cursor over a question!

2. Where does Ferrari come from?

Ferrari was invented in Italy

4. One of Ford’s models has the same name as the breed of horse? What model is it?

5. How do we call an element of a car that gives audible warning?

6. How do we call a lockable room by the house where we can park a car?

This place is garage

A perfect selection of pictures for fans of automotive

Find printable coloring pages with the coolest cars from all over the world. You may choose from sports cars, off-road cars, trucks, pick up, oldtimers, rescue vehicles, ambulances, fire trucks, a police vehicle and many more.

Our coloring sheets with sports cars contain even luxurious models like Ferrari, McLaren F1 and Bugatti Veyron, Mercedes CL or off-road Jeep Wrangler. And you probably already know that they can ride really, really fast. Many young and big boys are dreaming about having one of those for them own. So get prepared for a big portion of awesome coloring. All children are invited and their dads too! Steady, set, go!