SpongeBob coloring pages tell a story about the crazy, underwater adventures of a little, yellow sponge and his numerous friends living in the Bikini Bottom. On 40 free and unique selection of pictures for children. Patrick Star, Squidward Tentacles, Mr. Krabs, Sandy Cheeks, Sheldon J. Plankton, and the main character himself finally joined Topcoloringpages.net’s magic world. So follow the life of Bikini Bottom residents and you will learn how to keep optimism in life despite adverse circumstances. 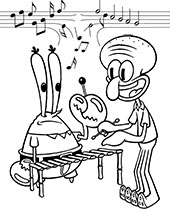 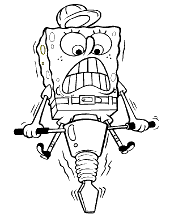 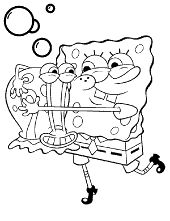 1. What fruit is the Sponge’s house?

His house is made of old pineapple.

4. What’s the name of the restaurant where Spongebob works?

5. Does Squidward Tentacles likes his neighbors?

No, Squidward Tentacles dreams to live far away from them.

6. What animal is Sandy Cheeks?

7. What's the name of the city where Spongebob lives?

9. Is Patrick a potato or a sea star?

Find a set of cool pictures with Bikini Bottom citizens

Welcome an absolutely unique selection of printable SpongeBob coloring pages with underwater adventures of a crazy sponge and his faithful friends from the Bikini Bottom. You will fin here clumsy Patrick Star, a bit grumpy Squidward Tentacles, resourceful Mr. Krabs, friendly Sandy, sleepy Gary the Snail and tiny Sheldon J. Plankton – we’ve got them all.

It’s an indisputable fact that living in the depths of the ocean isn’t always easy but this bunch of friends is really extraordinary and keep smiling almost all the time. And very rich sea life is waiting on each Spongebob coloring page so use the depths your imagination and give it a completely new look. This cartoon is very popular among children, but surprisingly many adults like to watch this hilarious series too. So ask your parents, uncle or aunt and try to color a couple of pictures together. And afterward, you can test them asking questions from our quiz:)