Basketball coloring pages – printable pictures for kids related to this extremely popular game. Here you’ll find basketball players, NBA teams’ logos, a ball, a basket, and many other cool pictures. Printable basketball coloring sheets are a great choice for all little NBA fans. No matter which team is your favorite, have fun and keep coloring. And remember that sport is good for your health, so don’t forget to take the balls and go outside to play with your friends from time to time. 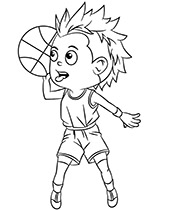 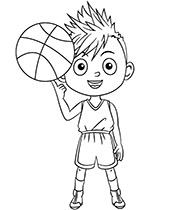 2. What is the number of players allowed on a basketball court?

It’s allowed to have 5 players from each team on the court at one time.

4. Who was the famous basketball player: Michael Jordan or Diego Maradona?

Michael Jordan was one of the greatest basketball players ever. Diego Maradona was a football/soccer player.

6. What's the name of the Houston basketball team playing in the NBA?

8. Which ball is bigger: for basketball or volleyball?

Printable Basketball coloring pages for kids is something that no NBA fan can overlook. Here you’ll find 45 unique and free basketball pictures of players, logos, ball, basket, game, and many more. All basketball coloring sheets are free to use and you can print them as many times as you wish, over and over again. As you can see, on the above printable pictures for children, you can also find logos of the top NBA teams, such as Chicago Bulls, Toronto Raptors, Washington Wizards, Los Angeles Lakers, New York Knicks, Sacramento Kings, Golden State Warriors, Miami Heat and many more. But also drawing of a basketball court, professional shoes, Air Jordan logo, and even an impressive slam dunk! And also remember to check interesting facts and a short quiz. That’s yet another piece of entertainment we’re giving you for free.

You probably already know it, but it’s also worth remembering that practicing sport can be very beneficial for your health. Both your mind and body develop better this way. So don’t forget to go outside and play an enjoyable game with your friends on a regular basis. Especially when the weather outside is nice and the sun is shining. And afterward, you can print and color the basketball coloring pages together. Or watch your favorite team on tv. And who knows, maybe one day you will become a professional player yourself.