That’s what we call the totally amazing set of Spiderman coloring pages for children! And especially for boys but all girls are welcome here with the open hands too of course. The real superhero is fighting with evil and brings justice, peace, and equality to the citizens of New York City. A lot of excitement and great quality on each Spiderman coloring page is guaranteed! And after coloring, there is also an extra bonus – quiz + several interesting facts about Spiderman. All for free! 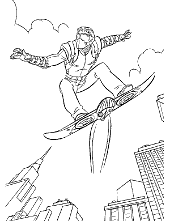 2. What are the names of Peter Parker’s step parents?

3. Is Venom a friend or foe to Spider-Man?

Venom is his fierce enemy.

4. What city does Spider-Man live in?

He lives in New York.

5. What caused mutations in Peter Parker's body? A bite of a radioactive wasp or spider?

A bite of a radioactive spider.

Printable Spiderman coloring pages – that means a lot of energy and exciting emotions. But are you ready for it? Noble Peter Parker again sacrifices his convenient life and acts bravely whenever the citizens of New York City are in danger. No matter what, he always fights evil in every form and helps the local police to bring order and justice.

Police squads not always can handle the situation and sometimes they urgently need the help of a true superhero. So he uses his special abilities and lots of Spiders’ Web. With Spider-Man coloring pages, you definitely won’t get bored too quickly. There’s no time to waste so grab your crayons in hand and let’s get the coloring party started – astonishing and printable pictures, quiz and interesting facts about Spiderman are waiting for you!