The whole bunch of friends is here: Yabba Doo, Shaggy, Scrappy-Doo, Fred, Daphne, Velma and of course some of their scary enemies. Numerous monsters, ghosts, zombies even witches… but wait a minute! I think that’s something wrong here. Maybe it’s just a clever disguise? Follow those incredible adventures and find out the truth. Scooby-Doo coloring pages are 40 pictures for children which guarantee a lot of fun, adventures and unexpected scenes. 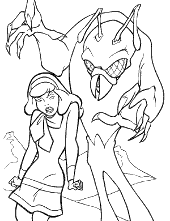 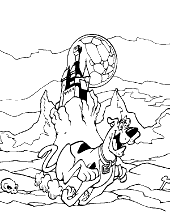 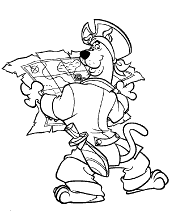 Place your mouse cursor over a question and see the answer!

2. What’s the name of smaller but much braver dog from this cartoon?

This dog is Scrappy Doo

3. Which of Scooby’s friends likes to eat dishes made of ingredients which totally don’t match to each other?

4. What’s the name of a van which is usually used by a crew from a cartoon?

They named their van: Mystery Machine

5. What’s the name of a heroine who has very bad sight?

Rather no, Shaggy very often runs away as a first.

Coloring pages with Scooby-Doo who, as usual, not very bravely tries to unravel the riddles of mysterious ghosts, witches and monsters. Of course together with his dependable friends: his brother Yabba, steady Fred, clumsy Shaggy, little Scrappy-Doo, charming Daphne and shortsighted Velma. This unique crew is waiting for all children to color their various adventures and unexpected rivals.

Will Shaggy run away as a first again? Will the ghost on coloring page turn out to be just a disguised bad man? Watch the cartoon carefully and you’ll get all the answers. And don’t forget to look at a quiz and interesting facts about Scooby-doo.